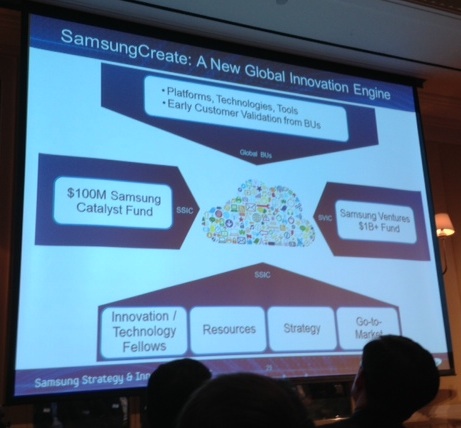 Samsung today offered hope to robot startups with the launch of its new Catalyst Fund, a $100 million commitment to the development of components, subsystems and disruptive technology. This is almost overshadowed by the simultaneous launch of their $1 billion Venture Americas Fund and the new Samsung Strategy and Innovation Center (SSIC), the Innovation Fellows program and the Samsung Create Challenge for entrepreneurs.

Samsung Electronics president, Young Sohn, explained that these diverse strategies represented Samsung’s commitment to looking further ahead than 3-5 years, to commercializing innovative research and connecting with entrepreneurs at every level. Samsung is also proud of their proven ability to invest in hardware and components, in part because they control their own supply chain.

Through their Innovation Fellows and partnerships with research groups, Samsung hope to focus on disruptive platforms; the Internet of Everything; Mobile Health; Computer Human Interface; Cloud and Data Center Architecture; and Mobile Privacy. They’d also like to hear from you if you are building something that will play nicely with their new ultra thin flexible display.

Because Samsung is focussing on disruptive technology, its new Innovation Center will be headquartered at Sand Hill Road in Silicon Valley, and will be led by Samsung Electronics president and chief strategy officer Young Sohn. “Being in Silicon Valley is critical because this is the epicenter of disruptive innovation,” Sohn said.

“By 2020, Sohn said, Samsung expects there to be 120 billion connected devices around the world. And the company wants to connect all of those devices, hopefully capturing an ever-larger portion of the electronics market in the process. Samsung hopes to double its revenue between now and 2020 and grow to a $400 billion company by that time. With the growing number of devices, Samsung sees the need for new technologies around cloud infrastructure, mobile privacy, Internet of Things, and other related topics.” [http://techcrunch.com/2013/02/04/samsung-strategy-and-innovation-center/]

Samsung’s Venture Americas Fund has already invested $160 million in 2012 in 20 deals, and over the years has seen more than 60 exits, with 47 IPOs and 16 acquisitions. The fund increase to $1 billion shows a strong commitment to hardware and component companies. Alongside the Ventures Fund, the Innovation Fellows and the Catalyst Seed Fund, Samsung are launching an entrepreneur challenge later this year. Aimed at identifying and nurturing artists and engineers, with $10 million in seed funding and access to Samsung’s R&D, Innovation Fellows and SSIC, the SamsungCreate Challenge is a must. 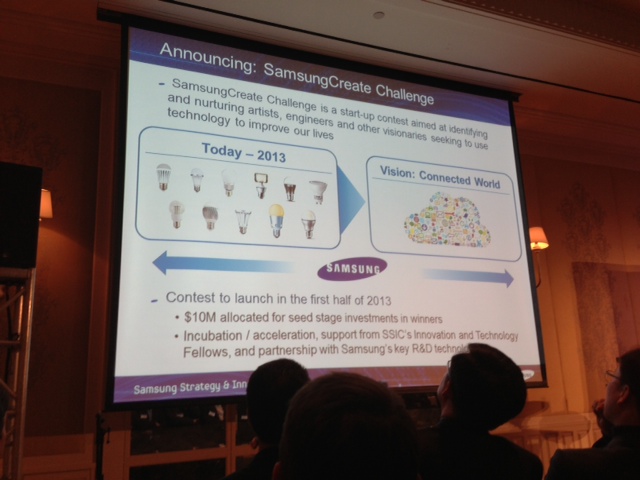