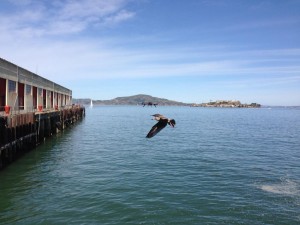 The first Engadget Expand expo at Fort Mason in San Francisco was a great weekend out with lots of robotics. In fact the striking thing was how much of the event was talking about or demonstrating robotics – even in some of the panels which were ostensibly about something else ie. space exploration, smart devices and arguably even 3D Printing.

Speakers at Engadget’s weekend expo include: Steve Cousins of Willow Garage, Chris Anderson of 3D Robotics, Marc Raibert of Boston Dynamics, Russ Angold of Ekso Bionics, and Catherine Mohr of Intuitive Surgical. The panels are all online at Engadget and linked to below.

There was also a provocative panel on how science fiction shapes technology and vice versa with Daniel H Wilson, John Scalzi, and Veronica Belmont. Some of the companies who are finalists in the Insert Coin competition are robotic too, from the cSpring humanoid robot to the Ziphius aquatic drone. And for those interested in robot business development the pre event poll found that most respondents want a house cleaning robot:

I’ve included a list of some (not all) of the videos in rough order of the event: