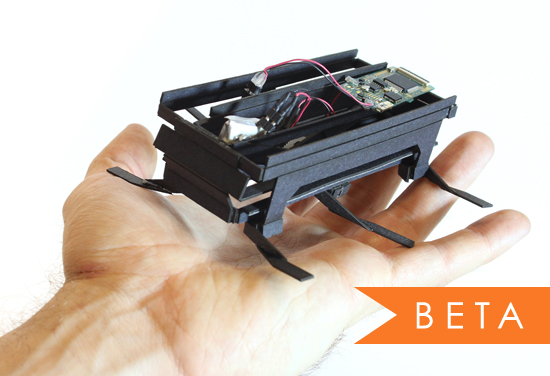 Dash is the first product to launch today on Dragon Innovation‘s new hardware crowdfunding site. Dragon Innovation was founded in 2009 by Scott Miller and Herman Pang, ex iRobot and Hasbro. Dragon are partnering with GE, Qualcomm and freescale to bring us this new hardware crowdfunding site, which seems to be nicely positioned to accelerate startups somewhere in between Quirky, IndieGogo and the nuts and bolts of real world accelerators. Of course, Dragon are also behind Bolt, Boston’s new hardware accelerator.

The first 5 products on the crowdfund site include: Dash, the cockroach inspired robot; Mimo, a smart baby body monitor; Ollie, a slim flat multipurpose tool; LIMBERboard, a flexible wearable microcontroller board; and RunNRead, making reading while exercizing easy. It’s not clear whether the Dragon site plans to be more than just a shopfront for Dragon products but Dash is a cool little robot.

The Dash team from Berkeley Biomimetics Millisystems Lab have turned their research into an affordable, educational arduino based cockroach inspired robot kit. The manufacturing process is even more interesting. Dash is made using smart composite microstructures, or SCM, a technique allowing flexible joints or moving components to be made from the same sheet of material as more rigid body or limbs.

The SCM material is a sandwich of cardboard, plastic, and adhesive. We laser cut windows in the cardboard, leaving only the flexible polymer behind. This allows the windows to flex like a hinge. By cutting these hinges in certain locations and patterns, we can build up complex folded mechanisms such as hips, joints, and transmissions. As a result, Dash is very quick to fabricate, and design changes are easy. [Dash Robotics]

Of course, any product from the Berkeley Biomimetics Millisystems Lab is leveraging years of research into things like gecko adhesion, cockroach running and dragon fly flight. The springiness of natural animal locomotion has been incorporated into the mechanics of Dash’s design, enabling Dash to move and turn quickly without needing heavy, expensive servos or powerful processors.