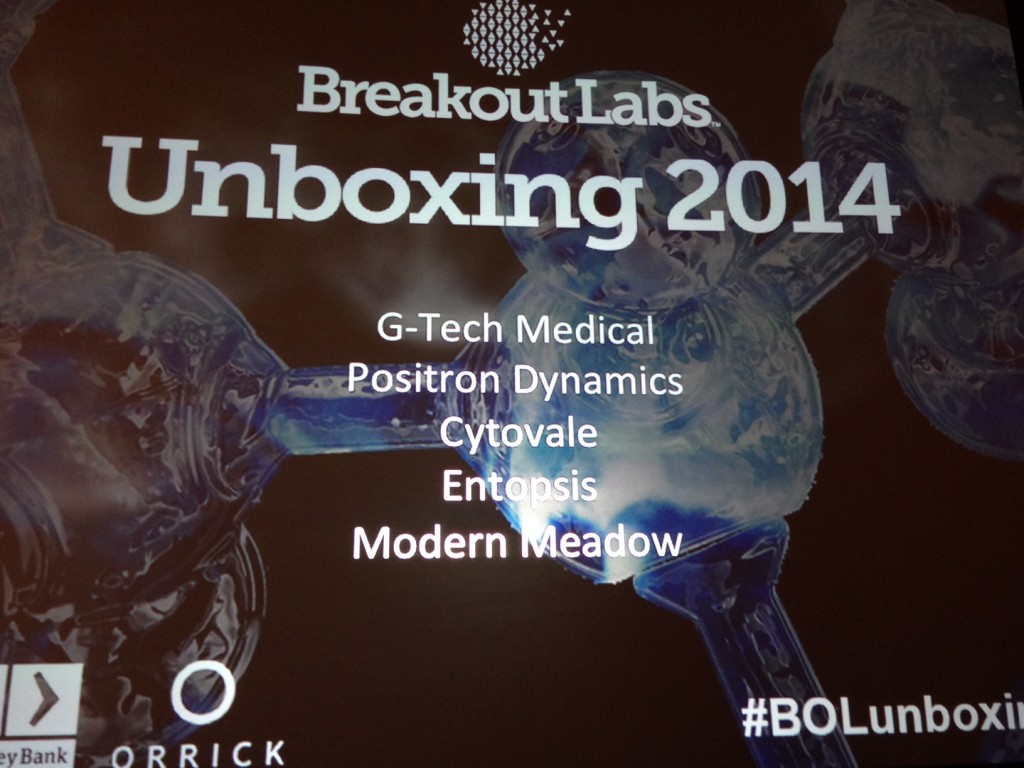 I’m at Breakout Labs 3rd ‘unboxing’ today at the Terra Gallery in San Francisco. Founded by the Thiel Foundation in 2011, Breakout Labs provides seed stage funding of up to $350,000 to early stage companies who want to change the world. While the majority of the first startups are in biotech, there are one or two hardware companies and Breakout Labs portfolio manager Michelle Kim-Danely is on a mission to find more robotics startups. Robots that can change the world.

The companies presenting today exemplify the hard problems/real stuff ethos of Breakout Labs. Modern Meadows is a NY based startup growing meat and leather with the latest tissue engineering technologies. The cofounders, Gabor and Andras Forgacs previously founded Organovo, a startup that pioneered 3D bioprinting. Positron Dynamics, from Pasadena, is planning on getting us to the stars using antimatter, or in the shorter term using positrons for applications like medical imaging. (Super cool fun fact; Positron Dynamics have been experimenting on antimatter in the same space as my hackerspace, Robot Garden.)

Atoms are harder than bits, but the people at the Breakout Labs’ companies are bold and dedicated to a definite view of the future.  We believe they’ll prove that new science addressing hard problems can create great businesses that make our lives better. [Breakout Labs]

I usually tell startups to focus on ‘boring’ robotics, because you won’t get funded if the return on investment is further than 5 years out. But just occasionally, you have the opportunity to secure philanthropic or long term funding that is interested in the really big ideas.

Today, there are many scientists with bold ideas that could have tremendous value for society. Too often, they don’t receive the support they need to launch from the lab and into our economy. We want to give those radical ideas a chance to thrive. We want to jailbreak them from existing research institutions and set them free.  We want to champion technology that has the potential to change the world and take our civilization to the next level. [Breakout Labs]