The NY Times recently connected lean startup methodology with robotics in a great article by Steve Lohr, Dec 5 2011. One example was Stanford engineering graduate Lee Redden’s Blue River Technology, a Sunnyvale robotics company developing a robotic weed killer for organic farms. While Redden’s startup might develop new hardware, these days a lot of the hardware has been built. What’s missing are new business cases to extend the reach of small robotic startups and existing robotic industries. Robotics is ready for a revolution. 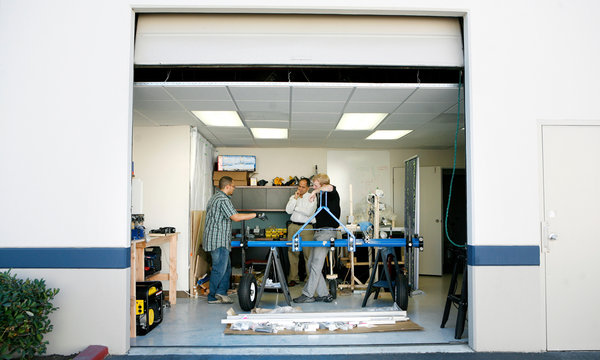 Ramin Rahimian for The New York Times | IN THE LAB From left, Fred Ford, Jorge Heraud and Lee Redden worked on the prototype of a farming robot. |By STEVE LOHR |Published: December 5, 2011

The start-up here points to the latest stage of evolution in Silicon Valley, the world’s epicenter of innovation. Over the years, the region has shown an unmatched economic dexterity in jumping from one industry of opportunity to another, from military electronics to silicon wafers to personal computers to the Internet. But the business of the Valley today is less about focusing on a particular industry than it is about a continuous process of innovation with technology, across a widening swath of fields. The trend reflects the steady march of that most protean of technologies — computing — as it makes further inroads into every scientific discipline and industry. Clean technology, bioengineering, medical diagnostics, preventive health care, transportation and even agriculture are part of the mix these days for the Valley’s technologists and entrepreneurs.

The pace of discovery has quickened, not only for technologies but also for the process of finding out what companies will succeed. “What’s different in the Valley is that we’ve found a quasi-scientific method for reinventing businesses and industries, not just products,” said Randy Komisar, a partner in a leading venture capital firm, Kleiner Perkins Caufield & Byers, and a lecturer on entrepreneurship at Stanford University. “The approach is much more systematic than it was several years ago.”

The newer model for starting businesses relies on hypothesis, experiment and testing in the marketplace, from the day a company is founded. That is a sharp break with the traditional approach of drawing up a business plan, setting financial targets, building a finished product and then rolling out the business and hoping to succeed. It was time-consuming and costly.

The preferred formula today is often called the “lean start-up.” Its foremost proponents include Eric Ries, an engineer, entrepreneur and author who coined the term and is now an entrepreneur in residence at the Harvard Business School, and Steven Blank, a serial entrepreneur, author and lecturer at Stanford.

The approach emphasizes quickly developing “minimum viable products,” low-cost versions that are shown to customers for reaction, and then improved. Flexibility is the other hallmark. Test business models and ideas, and ruthlessly cull failures and move on to Plan B, Plan C, Plan D and so on — “pivoting,” as the process is known.

The National Science Foundation is betting on the new model to improve the rate of commercialization of the university research it finances. In October, the foundation announced the first series of grants for what it calls the N.S.F. Innovation Corps. The 21 three-member teams selected from across the country will receive $50,000 each for six months to test whether their inventions are marketable. It begins with a swing through Stanford and courses taught by Mr. Blank and others, followed by online classes and mentoring. Each team is expected to constantly test its ideas and products with customers, to experiment again and again, adhering to the lean start-up formula.

“It’s all about how to apply the scientific method to market-opportunity identification,” said Errol B. Arkilic, a program manager at the foundation. “And that is exactly why this method is the one the N.S.F. selected.”