It’s our turn for a Grand Challenge! The prize will be a successful million dollar business. The catch is you build it yourself. The rules? Well, you don’t need to be a robot scientist to do it. You just need to build a robot business!

Take an existing robot platform – EITHER an autonomous mobile robot (like Adept’s) OR a semi-autonomous drone (like Parrot’s)  – and create a successful business. MVP it. Find customers. Build software/website. Create a market. Distribute it, sell it, support it, grow it. Congratulations, you just won… NO, you just earned a million dollars!

It’s about turning your great idea into products for others to enjoy. That’s difficult. But we’re really excited by the opportunities that exist for great robot businesses built on existing robot platforms. The Joggobot is a great example. 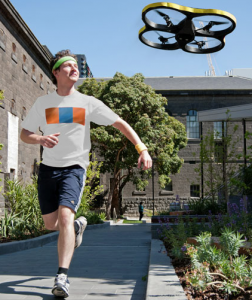 The Joggobot is the creation of Floyd Mueller and Eberhard Gräther of the Exertion Games Lab at the Royal Melbourne Institute of Technology in Australia.

This is a great idea. I want one. Who else does? And out of everyone who wants it, who has the money to pay for drone plus software plus marketing plus… Well, probably a lot of people do! Do the research and find your product/market fit.

Maybe crossing the chasm isn’t exciting for robot researchers but by now robotics is very ready for a service industry ecosystem. A relatively small pool of robotics researchers have other things to do than create ‘killer robot apps’! One way to kickstart the robot business model process is to involve select domain experts to better explore need. Another is to have diversity in your design team. At Robot Launchpad HQ we have a heap of ideas for great robot businesses, but ideas are worthless unless someone executes.

Here’s an example: What about ‘lost child finding’ quadrocopters? The average toddler is remarkably adept at slipping away, avoiding restraints, unlocking doors and disappearing into crowds. There’s no replacing parental care though. The average parent wouldn’t be the market, but the average parent would appreciate shopping malls, playgroups, playgrounds, restaurants, sports events etc. that offered simple additional safety services. Put the mall app on your phone and send a photo of your toddler to the mall drones, as a supplement to the existing lost child services.

I personally think that involving the mothers of toddlers into a discussion about robots will unlock a heap of other pain points that might have robot answers. It’s the first steps in the oncoming consumer robot revolution, starting with controllable semiprivate indoor spaces that are halfway between the factory or warehouse and the home. I’m thinking shopping malls, hospitals, airports, sports stadiums, prisons etc.

So the Robot Launchpad Grand Challenge is to create a viable robot business using an existing autonomous aerial or mobile robot. Keeping it simple, think of controllable indoor spaces and easily programmed GUIs using a smartphone and/or a cloud service. You are putting the value in the sandwich between the robot hardware and the internet/phone. Find the customers, create the market. Ship the robot. Support the business. Earn a million dollars and our undying respect in the Robot Startup Hall of Fame!