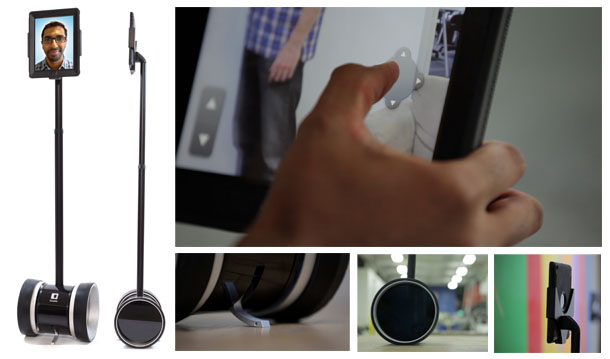 Double Robotics, a recent graduate from Y Combinator (http://ycombinator.com), builds telepresence robots, characterized by ground-breaking price ($2,499, can be pre-ordered now for $1,999), great design, light weight and high level of simplicity — it works right “out of box” and uses iPad as a platform.

Double Robotics already has $1.2 million (600 units) in pre-orders (in one month since the launch), from 44 countries around the world. Customers include 24 universities, as well as 17 Fortune 500 companies. Since the first production run of Double has already sold out, the investment from Grishin Robotics will be spent primarily on scaling manufacturing, as well as hiring and further product development. New pre-orders will be delivered in early 2013. Engineers interested in career in Double Robotics can get in touch with the company by the e-mail jobs@doublerobotics.com. [Press Release NEW YORK, NY–(Marketwire – Sep 21, 2012)]

Double Robotics have just moved into their own premises in Mountain View, and it’s encouraging to see that Silicon Valley startup culture is producing such good returns for robotics, both for robotics professionals and for the hopes of robot companies looking for investors. The time is ripe for consumer oriented robots that are more than toys. Sophisticated robotics have become affordable – largely by leveraging smartphone and tablet technology and internet connectivity. This aligns with Dmitry Grishin’s background as cofounder of mail.Ru, the giant Russian mail and media service. It will be interesting to see if Grishin stays in the comfort zone of communication robotics in the future, or steps out into the world of more task oriented robotics.

“Investment in Double Robotics perfectly fits our strategy,” said Dmitry Grishin, founder of Grishin Robotics. “It is a consumer-oriented product with potential to fit a broad range of applications and has already generated strong consumer demand. It’s also important that the price of the product makes it accessible to the wide audience. In addition, the team has creative approach to design and is keen to build user-friendly products — both are very important focus areas for next-generation personal robotics companies. Double Robotics is well positioned to leverage the unique potential of the prominent telepresence robotics market. We have a great belief in Double Robotics team and its product.”

“We are thrilled to have Grishin Robotics and Dmitry Grishin, in particular, as our largest investor to date,” said David Cann, Co-founder of Double Robotics. “We read about the new investment firm and Dmitry’s experience in the field of robotics in June 2012 when the fund was announced. The timing was perfect, as we were just beginning the Y Combinator program with our prototype robot. After our public launch in August, we met with Grishin Robotics and were immediately impressed with their mission and deep knowledge of the robotics industry’s past mistakes and potential future. We look forward to working with Grishin Robotics in the years to come as we build our business.” [Press Release NEW YORK, NY–(Marketwire – Sep 21, 2012)]