I interviewed Elad Inbar, CEO of the RobotAppStore, just before the announcement that Grishin Robotics was investing $250,000 in this cloud robotics market play.

For Grishin Robotics, the future is in the clouds. Grishin Robotics are investing $250,000 into RobotAppStore, an online marketplace for robotics applications. It seems that Grishin is betting on the robotics industry following the same patterns as the smartphone or personal computing industry. But can robotics be compared to either personal computing or smartphones, given the lack of a unified robotic platform or even a common robotic function?

Elad Inbar, the founder of RobotAppStore believes that we are seeing the same sort of convergence in robotics as happened in the mobile phone industry. In the early days of the phone industry, developers used to have to build a different ring tone for every single model of phone, even phones from the same company. This convergence in robotics owes a lot to the development of ROS and the increasing use of COTS or common technologies.

RobotAppStore and Grishin Robotics also have infographics on robot apps and cloud robotics. 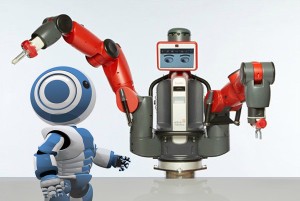