Alex Garland’s first feature film as a director, Ex Machina, had its US debut at SxSW on March 14. This stylish idea film explores the Turing Test in a very Pinteresque fashion as a young coder falls in love with an advanced AI. Ex Machina is beautifully framed, but Garland’s stark script succeeds on the strength of the acting from Domhnall Gleeson, Alicia Vikander and Oscar Isaac. 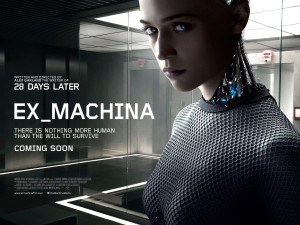 Garland’s writing career launched in 1997 with the best selling novel “The Beach”, which the Times called the Gen X answer to Lord of the Flies. After a string of cult successes like 28 Days Later, Sunshine, Dredd and drafts of Halo and Logans Run, Garland became fascinated with the emerging promise and perils of AI. In the Q&A following the SxSW screening, Garland talked about feeling a zeitgeist, a technological and cultural turning point, compelling him and other film makers and writers to address robots and artificial intelligence.

Although Garland says that he’s on the side of the robots, it’s an uneasy truce. Garland describes his film as the story of ‘two brains torturing each other’. That’s true. In Ex Machina, Tony Stark meets John Searle in a gripping drawing room theater, when a billionaire tech genius recruits a young coder to administer the Turing Test to his secret advanced embodied AI.

And it’s a stark film, there are only 4 characters; 2 men and 2 women. 2 AIs and 2 humans. And which two are the brains? That is supposed to be uncertain, but anyone who has used the Bechdel Test to analyze films or popular culture for gender issues knows exactly where the ‘brains’ are.

The Bechdel Test started as a gender litmus and has become a remarkably useful indicator of power imbalance. The test is named after Amy Bechdel a cartoonist who outlined the rules in a 1985 cartoon. To pass the Bechdel Test, a film has to have two women in it, who talk to each other, about something other than a man.

Sometimes the proviso is added that the women have to have names, because some films can have many women characters, but if the characters are all “girl at checkout” and “girl with gun” then they are just devices to add color or move the action forward. And of course, possession of a name is an important indicator of personhood, or identity awareness, so it’s always one of the first steps to separate the beings from the machines.

Many films seem at first glance to have badass female characters but when put to the Bechdel Test, it becomes clear that they never talk to anyone but the main man, or if they talk to each other, it’s about the main male characters. So really, they have no interiority, no self awareness and are probably going to fail a Turing Test. That’s where I think it would be very interesting if the Turing Test were to meet the Bechdel Test more often.

Garland is also playing games with gender and the alienness of AI in Ex Machina. There is a beautiful scene where Ava, the AI, performs a reverse strip tease, putting on her human body.

But I’m afraid that Ex Machina falls at the final fence, as does just about every other science fiction film I’ve ever seen, aside from Alien. The Bechdel Test is useful for more than examining gender representation. It can be our Turing Test for creating believable alien or artificial life forms. If you look at our filmic or cultural representations of the other or alien, then you have to be struck by the singular nature of them all. From Frankenstein to Big Hero 6, do they have any reality without the central human characters?

No, they are alone. Even Alien is alone. At least in Frankenstein, it is the utter aloneness of the new form that is the whole story. Films that have pushed the envelope are few. And doing a quick mental check, the was left feeling empathy for the ‘others’ in only a couple, like Westworld, BladeRunner and Planet of the Apes, and the books of writers like Brin and Cherryh.

How believable are our ‘other’ AIs and robots? Brad Templeton said that an autonomous vehicle isn’t autonomous until we tell it to go to the office and it decides to go to the beach instead. A life outside of our anthropomorphic story is what’s missing from our AIs, aliens and others. We don’t really care about them or their lives outside of their impact on our own. And this makes us poorer.

The final shot is a haunting homage to Plato’s Cave’ although Garland credits his Director of Photography entirely for it. In The Republic, Plato posed the question, what if humans were born chained to face a cave wall seeing the world only as the shadows passing in front of a fire behind them in the mouth of the cave. Imagine the difference when you see the world, unchained from the cave.

I can’t say more. Go see Ex Machina. And use the Bechdel Test on everything.