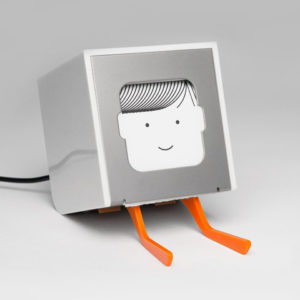 Berg’s Little Printer – another ‘appliance with attitude’.
Robotics is trending towards the consumer. We’re on a journey towards ‘appliances with attitude’ that started with the now ubiquitous GPS and smartphone technology. These are some of the underlying trends in robotics in the Valley, and elsewhere, that will enable the emergence of single purpose lifestyle consumer robots, like Autom, the robot weightloss coach:
Finally, coming over the horizon is the huge potential for new forms of visible robots (using technology trends like ‘soft bodied robotics’) which do things we haven’t really thought of yet. The democratization of robotics technology means that robotics is no longer the preserve of military and industrial applications.
Robots are becoming more affordable for the long tail of niche applications in the consumer space. That robotics is finally trickling into the consumer space opens Pandora’s box on all the things that robots might be able to do that haven’t had a large enough proven market to warrant investment in the research and development.
Combined with the emerging maker movement, we are entering an age of consumer robotics products and components which can be customized for new use cases on demand. This trend towards ‘bespoke robotics’ is going to catalyze increasingly viable commercial development of robotics components and interfaces.
One end of this is going to be the home vehicle modification space, where aftermarket robotic accessories will enable people to add sensors, collision avoidance mechanisms, auto park etc as aftermarket. This is a highly regulated space, but one in which a huge market is clear.
At the other end of this is the fashion industry, rather than the health industry, which will be comparatively unregulated but incredibly creative and fast moving. Think of FitBitz on steroids. Literally. What if I want my clothing to change color when my mood changes. What if I want my clothing to become armor in a collision/violence situation. What if I want my clothing to send messages to me or my friends when we are proximate. What if I want my clothing to act as an exercise machine and provide resistance. Or the opposite, can I engage additional strength to help me lift objects, my shopping bags etc.
Having rhapsodized about a future that is still someways off, I’d like to close by saying that for me the robot achievement of 2012 isn’t Baxter from Rethink Robotics. It’s Autom, the robot weightloss coach now on sale, by Cory Kidd and Intuitive Automata.
2010 marked the emergence of crowdfunding for internet of things and consumer devices. 2011 was the year of smartphone robots. 2012 has seen the consolidation these trends into  funded startups with strong retail markets (eg Orbotix, Romotive) and the emergence of a new genre of consumer robot – the lifestyle robot.
As a consumer, I’m absolutely willing to buy a robot (or smart device) that helps me achieve lifestyle goals, as long as it’s affordable (<$500), easy to interface with (voice/touch/smartphone) and does one thing well.
We’d all love to have a general purpose household robot but Rosie Jetson just isn’t ready yet. I’m happy to have several small affordable robots that do just one thing well. One to vacuum, one to fold clothes, one to help me lose weight.
You could say that these are just appliances, and that would be correct. But the research behind Autom confirms that people like to interact with embodied devices that can engage in a social relationship with us. I see the future of robotics as ‘appliances with attitude’.