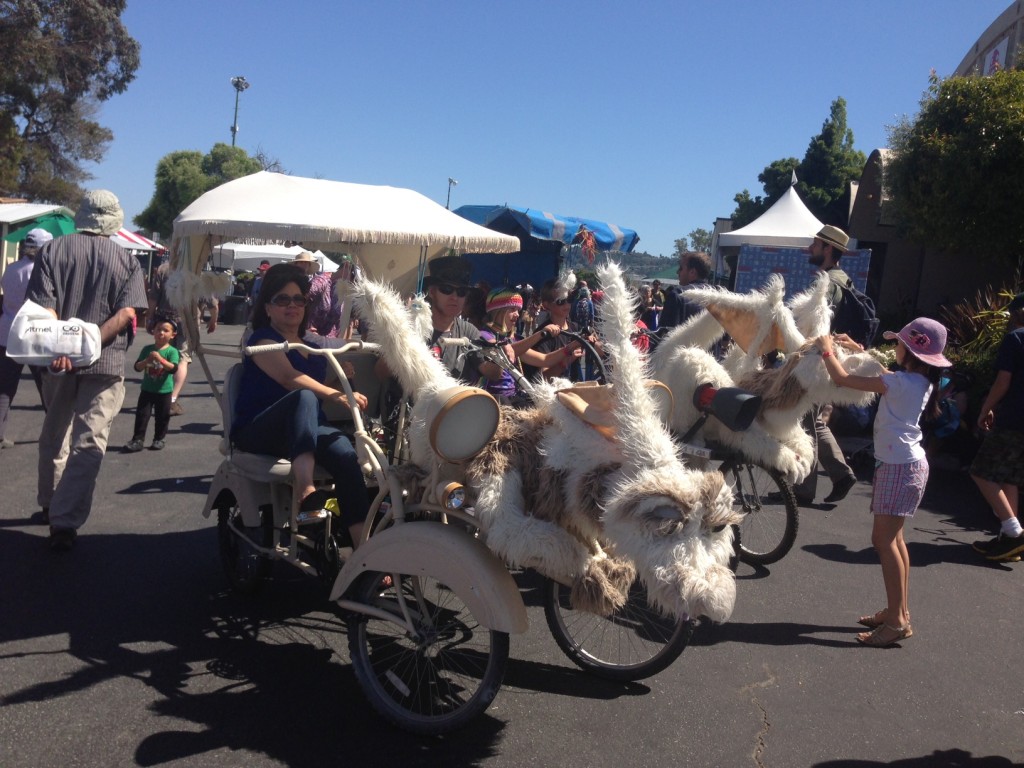 It’s impossible to see everything at Maker Faire but I tried. I was exhibiting with my hackerspace Robot Garden and had the pleasure of being both a participant and a spectator. This was the 8th annual Maker Faire and it’s grown from 18,000 attendees to over 165,000, and that’s not counting hundreds of participants ranging from hobbyists and performers to startups to research groups, hackerspaces and supporting companies like Autodesk and TechShop. And yes, there were robots.

Revolution was in the air. Some of the feature speakers were; Chris Anderson, ex Wired editor-in-chief, founder of DIY drones and 3D Robotics and author of “The New Industrial Revolution”, Nolan Bushnell, cofounder Atari and author of “Finding the Next Steve Jobs” and Lee Felsenstein, designer of Osborne 1, the first commercially successful personal computer, founding member of the Homebrew Computer Club and veteran of the 60s free speech counterculture revolution and the 70s/80s personal computing/internet revolution.

Lee Felsenstein pointed out that the maker movement has all the hallmarks of the revolutions he has lived through already, including being visible largely in hindsight, being a movement with mass uptake in many small particulars, eventually leading to wholescale social change. Chris Anderson situates the many small particulars in all the materials, manufacturing and funding changes available today, which lead to increasingly low barriers to entry into a creative economy. The importance of creativity was echoed by Nolan Bushnall who said, “If you want to be creative, read science fiction. As history.” Bushnall offered other tips such as play games, keep your workplace crazy, have a lot of different jobs, feed your brain, and say no to no sayers. Bushnall looked into a future of 3d printing, nanotechnology and robotics and the complete disruption of education within 5 years.

Robotics at the Faire

I noticed that there were more drones this year at Maker Faire with a Drone Games arena in the Expo Hall. OpenROV had a swimming pool at the back (but wasn’t the only submarine or UAV about!) There were blimps as well, with space represented by Ardusat, Nanosatisfi, NASA and the CubeSat initiative. There were several budding robotics startups like Barobo, who are on to their 3rd iteration of modular robots and just launched a kickstarter campaign for their new Linkbots. 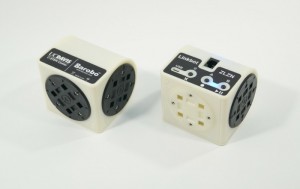 While the Linkbot is easy to use straight out of the box and suits any ages, it’s got a lot of features that will appeal to hardcore hackers. The Linkbot has two rotating hubs with absolute encoding, an accelerometer, buzzer, multicolor LED, and is ZigBee-capable wireless with a 100m line-of-sight range. The Linkbot is Arduino compatible and a breakout board allows users to connect all sorts of sensors such as range finders, LEDs, or thermostats. Plus you can 3D print and mount any sort of arm or wheel or connector to the 3 attachment plates on each Linkbot.

EZ-Robot is another fun educational robotics product that I’ve been following for a couple of years and I’ve watched them grow from 1 person with prototype at Maker Faire 2011 to a polished 8 person organization with Dagu as their distribution chain.

Fellow Robotics is a relative newcomer but I’m going to be following Fellow closely. At first glance they appear to be a double for Double Robotics, however the team were keen to explain that their focus is on creating a multi sensor capable platform with native web browser support. Look out for a Fellow Robotics crowdfunding campaign soon, but as a result of feedback received during Maker Faire, they may have pivoted from selling their robot package to simply selling their controller board.

There were a lot of interesting sensors and chips, some new but it’s great to see just how creative people can get with comparatively simple components. Another great robotics announcement was the launch of Massimo Banzi’s Arduino Robot. For around $275, the official Arduino Robot will be available from June. 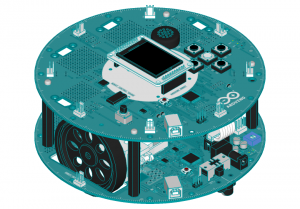 The robot has two processors, one on each of its two boards. The Motor Board controls the motors, and the Control Board reads sensors and decides how to operate. Each of the boards is a full Arduino board programmable using the Arduino IDE, based on the ATmega32u4 (datasheet). The Robot has many of its pins mapped to on-board sensors and actuators. Both processors have built-in USB communication, eliminating the need for a secondary processor. This allows the Robot to appear to a connected computer as a virtual (CDC) serial / COM port. The Arduino Robot is the result of an international collaboration aiming to make science fun, and is completely open source.

There were 3D printers everywhere but OmNom Project (at Robot Garden) launched the world’s first functioning 3D plastic recycler filament maker. Printrbot launched the Simple, a 3D printer kit for less than $300. Printrbot was one of the first crowdfunded 3d printer success stories and in only a year, Brooke Drumm has gone from being ‘just a guy in a garage’ to a million dollar business with 5 or 6 employees. 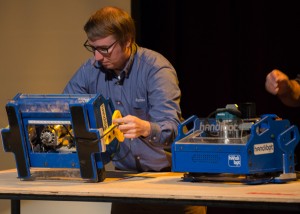 Shopbot also launched Handibot, the first portable CNC machine, at Maker Faire. Handibot, or something similar, is going to become THE tool at every construction site, and in most garage workshops. Handibot exemplifies the new ‘smart digital power tool’ class of devices which will soon become the norm. With one touch of a button, you can download specs for your job, into your device and get perfect results.

Another smart digital power tool, the Othermill, comes from Saul Griffith’s robotics lab, Otherlab in San Francisco. The Othermill is a small CNC machine aimed at creating custom circuitry. There’s also a kickstarter for the Othermill which is already 200% oversubscribed with 13 days still to run.

There were also laser cutters and Sugru and so so much more! but the how things are put together are just as big a feature of Maker Faire as the what.

As well as running a biomedical company, Macy is a technical artist, specializing in the creation of interactive sculpture and installation environments. Presently, Macy is working in the areas of magnetic resonance imaging, virtual reality, multichannel wireless physiological monitoring and smart textiles. 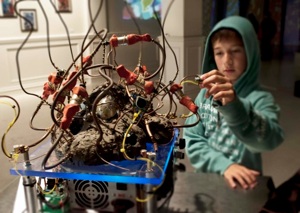 Alongside the art were many amazing educational STEM and robotics groups that I’ll mention only a few that resonated with me; Makie.me, Roominate, Goldiblox, LightUp (also with a Kickstarter), HackerScouts, Arcbotics, Thymio and as previously mentioned, EZ-Robot and Barobo.
Trends
Well, one trend was more drones, blimps, satellites, rockets and space. Another trend was seeing tech transfer over a few years, from the really bleeding edge to the excitingly forward thinking. One example would be cocktail or bartending robots. Bartendro from Party Robotics just had a successful kickstarter and has been iterating for a couple of years in places like Barbot. The Barbot competition and Roboexotica in Europe have spawned an increasingly complex and polished set of cocktail dispensing robots over the last few years, and have managed to make combining alcohol and robotics an even more attractive research topic, which in turn has culminated in a virtuoso performance by Makr Shakr, a project from MIT’s Senseable Lab, at Google IO last week.
So if you build it and it’s crazy, funny and completely impractical and clunky… just wait a couple of years and the first seriously commercial versions will start rolling out. Ditto with laundry folding and hamburger flipping robots.We’ve gone from novelty to plausibility in a fairly short time frame.
And finally the role of crowdfunding in all these new hardware and robotics endeavours is an almost pervasive trend. Most teams I talked to got going with a small amount of angel investment, primarily family and friends funding or sweat equity. Then instead of turning to institutional investors, VCs or angels at the early prototype stage, they are turning to crowdfunding. Teams expect to keep greater control over their projects, give away less equity and to be able to iterate as they explore their product/market fit in a less constrained environment.

Hardware startups aren’t sitting back waiting for term sheets these days, they are setting their own terms. This is particularly interesting, and perhaps frustrating to traditional analysis, because there is no guarantee that the next iteration from the team will have any connection to the last successful product. This leaves more scope for invention and you could see crowdfunding being utilized as research grants, as well as business development.