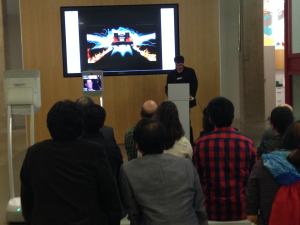 Henry Evans had a brain stem stroke in 2002 that left him quadriplegic. Since then he has turned to robotics to unlock his abilities. Robots For Humanity (R4H.org) is a project that chronicles Henry’s quest to find robotics solutions to augment and improve his life, and that of other people with disabilities, to “let people perform at their best”.

An event commemorating the project was hosted by Silicon Valley Robotics at Highway 1 last night, featuring guest talks by Evans and Steve Cousins, who helped Evans to co-found the project while he was CEO at Willow Garage. Steve Cousins is now the CEO of Savioke, a service and elder care robotics startup.

Henry spoke via BEAM telepresence device from Suitable Technologies. And some of the audience also attended via BEAM. Henry has also given TED talks via BEAM, and we were lucky enough to hear his new talk, which introduces ‘tele-tourism’ (no more spoilers) and describes the wide range of robotics or smart hardware solutions that Henry has inspired roboticists to build for him. 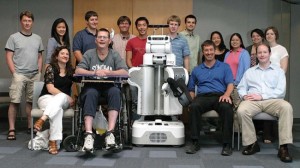 The original Robots For Humanity project involved using a PR2 to help Henry shave himself and scratch itches. But it’s not realistic to have a $400,000 robot in the house to scratch your nose, especially given the size of the robot! Since then, Henry has got a much simpler ‘Scratchbot’. He has also taken to flying drones and working with FXPAL, the Fuji Xerox multimedia research group on the Polly project. 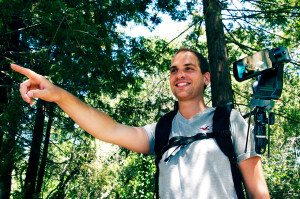 Polly is a wearable telepresence device, consisting of a smartphone on a stabilized gimbal. The viewing angle can be adjusted via remote control. The device can be carried by hand or on shoulder or perched on surfaces. The presence of a human operator allows for more social interaction in the telepresence experience.

The audience was inspired by the event and I don’t want to ruin the TED talk by saying anymore. But Henry still has plenty of suggestions for research projects that he’d like to see in his life and many of them are ‘simple’ things. Things like being able to control an automated bed with an eye tracking interface, not a remote control. Or to use a head mounted pointer to turn lights on and off.

These are simple things with a very big impact. And sometimes they are expensive things to build, but the impact that they have is priceless.

Evans also summed it up nicely in a video that is posted on the Robots for Humanity website: “It’s up to all of us to decide how we want robotics to be used – for good or for evil, for replacing people or for making people better.”